Inside "Curious Incident of the Dog in the Night-Time" 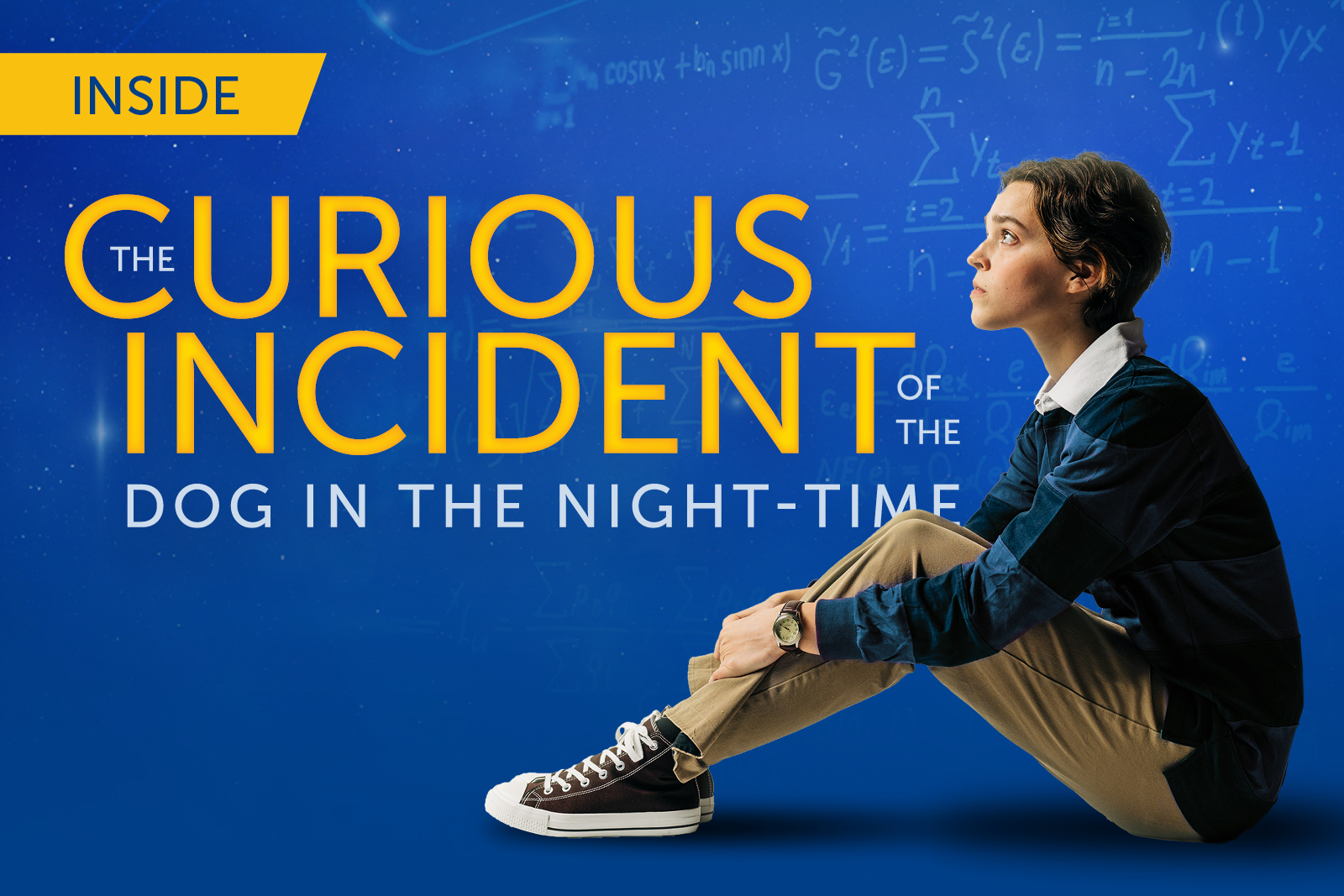 Thank you for sharing with us that you are a proud member of the autism community. Being autistic yourself, tell us about what it has been like playing Christopher Boone, who is also implied to be on the autism spectrum?

This is my first time playing a character that is written to be autistic, and it has been artistically euphoric for a lot of reasons. When I first started playing with the material, I realized that I was following my instincts in a way that I haven’t had the opportunity to do with other characters. When I’m playing a character that is supposed to read as allistic (which means not-autistic), I have to sort-of translate; “ok…what would an allistic person do in this situation? What would the neurotypical reaction be?” With Christopher, it feels like a much more direct shot to my own truth. Even though Christopher and I are very different humans, I am still much closer to being able to say “what would MY reaction be to this trigger” and just live truthfully in that.

It’s important for people to remember that autism is a spectrum condition, each autistic individual’s experience is distinct from the next, and Christopher is merely one example. What aspects of Christopher’s perspective and ways of navigating the world do and/or do not resonate with your own experience?

Absolutely! An image I really love to help people understand this is from the instagram account @autism_sketches (drawn by an autistic creator!) https://www.instagram.com/p/CSe9uEqMVMB/ They describe it not as one big spectrum, with one side being “less autistic” and one side being “more autistic”, but as a beautiful circle of micro-spectrums measuring various aspects of autistic experience (eg. sensory sensitivities, executive function, social differences….etc.) Autism manifests differently for everyone, and everyone’s autistic experience is valid!

As an actor, I try to bring as much of my own experience into the role as makes logical sense to the storytelling (without differing too far from what’s in the text), and that includes my experience with autism. Here are just some ways that my portrayal of Christopher’s autistic experience reflects my own…(there are many more, but these are the ones that are not overwhelming to attempt to describe):

We both frequently use “stimming” (short for self stimulatory behavior)  to regulate overwhelming emotions, (eg. drumming, hand movements, pacing, groaning, echolalia (a verbal stim, eg. “left, right, left, right”)). We both experience extreme frustration when we are misunderstood, difficulty with emotional regulation, and intense infatuation and dogged determination with “projects”. We both dislike eye contact (especially with strangers) and have a love for numbers and memorizing random details, a fixation with outer space and the natural world, an intense love of animals, and a reliance on systems and routines. We experience a similar detachment from intense emotions and a tendency to try to process them in a logical, mathematical way, we are both overwhelmed by too much unpredictable external stimuli, have difficulty with subtle social cues and a vehement uncomfortability with small talk, and vehement dislike and rage over systems that aren’t logical and fair. We also both experience a need to answer questions precisely, truthfully and thoroughly - hence the probably-too-long answer to this question!

Some ways in which we are different: On the “emotional intelligence spectrum,” I think Christopher is on the less-aware end, and I am on the extremely-hyper-aware-of-everyone’s-feeling-and-energys end. I’d say in general that I “mask” (term described in the next question) much more frequently and successfully (for better or for worse) than he does. His focus regulation differences also manifest differently than mine; he pretty much lives his life in a state of hyper-focus that I fluctuate in and out of depending on the situation. Regarding sensory sensitivities, Christopher is much more easily overwhelmed by loud noise and lights while I tend to tune it out to an alarming degree! His sensitivity to touch is more extreme and intolerable than mine - though I do experience “intimacy overwhelm” and am easily overwhelmed by intimate or “emotionally-charged” touch. We both have sensory sensitivities, though they have different triggers  - he can’t stand the sound of bangle bracelets, and I can’t stand the sound of an eraser against paper. Also…yellow is my favorite color!

Just like Christopher, many depictions of autism in the media only show autistic people excelling in STEM, yet you are one of many examples of how autistic individuals can be incredibly successful in artistic and creative fields as well. How do you feel being neurodivergent influences your approach to acting and is an asset in your artistic pursuits?

It’s hard to answer exactly how my autism and ADHD play into my artistry, because I’ve never been inside any other brain (and wouldn’t really want to for that matter)!  However, I think my extreme attention and fixation on detail, my ability to hyper-focus, my social differences, and my emotional-reactivity are actually really helpful to me as an actor. I don’t know if I can fully describe how my approach to acting differs from a neurotypical actor’s, but I do know that once I gave myself permission to approach acting “my way,” (and not necessarily the way people told me I “should” approach it,) I became a much more honest and confident artist.

Another thing - and I am stealing this from an interview with Mickey Rowe who was the first autistic actor to play Christopher Boone in 2017 - is that we autistic people “mask” all the time. I am constantly hiding certain autistic traits that are deemed “inappropriate” or “offensive” by a predominantly allistic society, and almost playing this separate, more socially-acceptable character/version of myself, in order to get by... and I - like many AFAB (assigned female at birth) autistic people - am really, really good at it!! So, and this is a little bit sad, but I think that acting, and character-building has always come easily to me, in a way, because in many situations I feel like I do it all the time.

Above all else though, neurodivergent people LOVE and NEED their “special interests.” For Christopher, it’s outer space, and Sherlock Holmes, and trains. For me, it’s theatre and music. They are different things, but the intense passion is the same. For autistic people, “special interests” aren’t just hobbies. They are life-lines.

Lastly, there are a lot of things about living with autism and ADHD that are really difficult and frustrating (mostly due to a lack of understanding and resources). Acting has always been a really important space for me to get to express all my “weirdness”. It is a really cool, and healing feeling when the aspects of yourself that feel like burdens in everyday life, can be explored and celebrated when funneled into something creative.

What do you wish neurotypical people knew about autism that is frequently misunderstood, and what do you hope audiences take away after seeing Curious Incident?

First, I would like for the harmful myth that autism exists solely in white, heterosexual, cisgendered male humans to be debunked. Autism exists in nonbinary people, in trans people, in genderqueer people and in cis women. Autism exists in Black people, Indigenous people, Latinx people, Asian people, Pacific Islanders and people of color. Autism exists in gay, straight, bisexual, pansexual, ace-spectrum and queer people. Autism exists in people with other disabilities and mental disorders or illnesses. It is often the communities where having autistic traits is most dangerous, that are most likely to be gas-lit about having autism in the first place. I am one human with autism, this is one perspective, and one story. It is so important to seek out stories from all these communities, to validate all autistic experiences, and to be skeptical of sources that only explore one presentation of autism.

Secondly, it’s so important to understand that autism is not a tragedy. There are a lot of scary statistics about people with autism, including disproportionate rates vulnerability to unemployment, houselessness, abuse, social exclusion, mental illness, and suicide. It is vital that we understand, however, that this is not because people with autism are “broken” or “wrong” or inherently “tragic”, but that our society is not designed to meet the diverse needs, or to foster the strengths of neurodiverse people. A great resource to help guide some thought and conversation around this idea is “the social model of disability.” Here’s a link that explains it well: https://www.scope.org.uk/about-us/social-model-of-disability/ I encourage everyone to check that out, to reflect on how they can be an ally towards the neurodiverse community, and to, again, be skeptical of sources that reinforce the stigma that autism is “tragic.”

Because I wouldn’t trade my autism for the world. I am really excited for the opportunity to play Christopher as my authentic, autistic self, and to portray Christopher’s experiences of autistic joy(!), the euphoria he feels when he has the resources he needs to succeed, and the confidence he finds when he figures out how to do things “his way”.